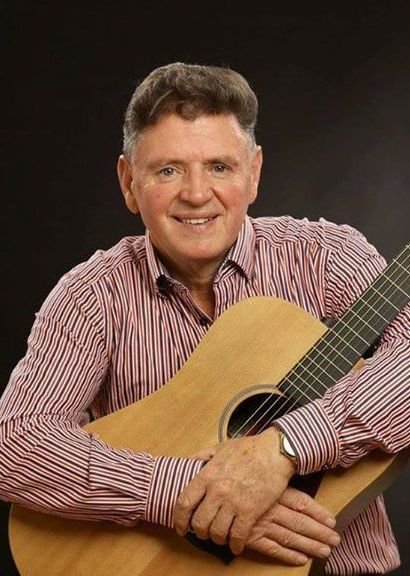 John's Story: "I was born and reared in Kilbeggan, Co. Westmeath, Ireland but I now live in Croghan, Co. Offaly. I have enjoyed great success and songwriting is a passion of mine. I have toured the length and breath of Ireland and throughout Europe. It has been an amazing journey and I look forward to entertaining in the years ahead and making many new friends and fans on my musical journey."

Johnny Hogan (born 31 August 1958), is an Irish country music singer-songwriter and guitar player. He was born in Kilbeggan, County Westmeath and is often referred to as the 'Prince of Irish country music' as well as the 'Offaly Rover'. Today, he is more often associated with County Offaly and has resided in the town of Croghan for over 30 years. He is married to his childhood sweetheart Esther and they have five children Caroline, Lorna, Robert, Dermot and Mark.

Hogan began his career in 1987 when he recorded a song titled 'Brown Eyes' which found its way into the hands of radio presenter Don Allen. He played the song which eventually made it to No. 1 in the Irish Country Music charts and remained there for several weeks. Such was the impact of that first radio play that hundred if people phoned the station looking to know more about this new singer.

In addition to his interpretations of country standards, Hogan has also written a number of original songs including ‘My Feelings For You’ and ‘Turn Back The Years,’ which were included on his first recordings for the label K-tel Records. In 1993, 'Stepping Stone' became a major hit for Hogan in St. Lucia, where he retains a large following.

John is a fan of John Denver and Hank Locklin and has recorded many of their songs.

At the time he recorded Brown Eyes, a song his mother used to sing to him, John was a supervisor with bord na mona.

John played his first professional gig in the Border Inn, Castleford, in County Donegal, to a sell-out crowd and became one of the biggest names in Irish Country Music virtually overnight.

During the 1990s, Hogan filmed an in-concert video, 'My Kind Of Country,' which was released on VHS and on DVD by Rosette Records. Hogan has recorded several studio albums in Nashville, Tennessee and is a labelmate on London-based Ritz Records with American country music singer Charley Pride. During this period, Hogan continued to build a following in the United States and was asked to perform at Charley Pride's theatre venue located in the city of Branson, Missouri.

Currently, Hogan hosts a weekly program called 'It's Country with John Hogan' on Sky 389 on the Keep It Country TV Channel, which focuses on interviews, news stories and music videos pertaining to country music.

Over his 30-year career, Hogan has continued to tour in Ireland, the United Kingdom, Canada and the United States as well as Spain, Portugal and St. Lucia, where he was given the title 'Freeman of St. Lucia'. "I have enjoyed great success and songwriting is a passion of mine. I have toured the length and breath of Ireland and throughout Europe. It has been an amazing journey and I look forward to entertaining in the years ahead and making many new friends and fans on my musical journey."