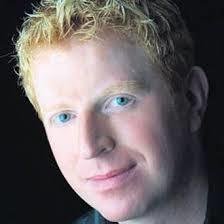 Tommy did a live interview with Brendan on the BG Country Show on Thursday March 26th. 2020. Tommy Fleming was born in 1971 in Aclare, County Sligo. His natural singing ability was evident at a young age whilst participating in local talent competitions and concerts. While still at school his first band was born a rock band called The Face of February and thus began the a life of gigging in local clubs and pubs.

Tommy Fleming was born in 1971 in Aclare, County Sligo, the youngest of six children to Anne and Paddy Fleming. His natural singing ability was evident at a young age whilst participating in local talent competitions and concerts and his performances always delivered something quite special. While still at school his first band was born a rock band (!) called The Face of February and thus began the a life of gigging in local clubs and pubs.

After leaving school (in 1990) Tommy started to establish himself as part of a Castlebar quartet known as Jarog performing in pubs and clubs around the country and regularly packing in the fans wherever they appeared. Their flame haired vocalist was also attracting attention at their many festival appearances across the country.

However, despite this success in many venues through the early 1990s, record companies didn’t appear to be too interested in his work. Then a chance encounter with renowned producer and composer Phil Coulter changed all that.

In July 1993, Phil overheard Tommy performing at a charity event in Westport, County Mayo and within days he was guesting with Phil and his Orchestra at the Opera House (Cork), the National Concert Hall (Dublin) and The University Concert Hall (Limerick).  Four months later he was touring North America, playing to huge audiences all across the USA and Canada, culminating in two shows in the Boston Symphony Hall and the legendary Carnegie Hall, New York.

Upon returning from the successful US tour, Tommy’s career took another leap forward when he was invited by Galway traditional group De Danann, to join them as lead vocalist, following in the footsteps of such living legends as Mary Black, Maura O’Connell, Dolores Keane and Paul Brady.

Tommy still had ambitions of a solo career and moving on, he finally recorded his first solo album in 1996, entitled “Different Sides to Life“.

On the basis of this album, Tommy was offered a solo recording deal in 1997 by one of Ireland’s independent labels. Thus began the start of a hugely successful solo career.

In November 1998, Tommy released his second solo album, “Restless Spirit” entering the Irish album charts at No. 5 and going on to achieve double platinum sales.

It was all looking so positive for Tommy and the reaction to the album was phenomenal. Then things changed dramatically.

During a promotional tour of the album Tommy was involved in a major car accident resulting in him sustaining a number of serious injuries, including a broken neck, leaving both his life and his career in jeopardy.

Tommy had been returning to his native Sligo when he took a shortcut near home. He veered off the road and hit a tree, loosing consciousness for some time. The car burst into flames and with the driver door damaged it was more than luck to escape the burning car.

Incredibly, Tommy walked for two miles, not realising the extent of his injuries, before being given a lift by a local couple. Still in shock, he arrived in Aclare where his family took him straight to Castlebar General Hospital. Presenting with severe neck pain, the Hospital immediately transferred him to the Mater Hospital, Dublin. Tommy Fleming had indeed sustained a broken neck and was fitted with a Jerome Halo.

(The Jerome halo brace is a complicated and intimidating looking apparatus designed to keep the neck and head immobile while the broken bones mend. It is best described as a large crude-looking metal cage, which comes down over the head and shoulders, and is literally screwed into the skull at four separate points to keep it in place.)

After several worrying and distressing weeks in hospital, Tommy was eventually allowed home and in his own words “I spent the first few weeks wondering if I was paralysed and what would become of my singing career. With a new album just out and a string of concert dates cancelled, I spent most of that time very quiet – which is not like me”.

As he recovered slowly from his painful injuries he wore the halo for 3 months which meant sleeping in one position propped up by pillows. A simple thing like taking a phone call became a major chore and bumping into doors was a common occurrence due to the size of the cage. It seemed that all he had achieved in a carefully nourished singing career was in danger of being lost. But in true Fleming spirit he fought against the odds and recovered to good health and his fine voice seemed fuller and more haunting than ever. Looking back at that dark period, Tommy describes it as “scary, the worst time of my life”.

During Tommy’s recovery, the other good news was that ‘Restless Spirit’ continued to sell and reached double platinum status.

A year later, the determined Tommy was back on the road touring and in the summer of 1999, he started work on his next studio album ‘The Contender‘.